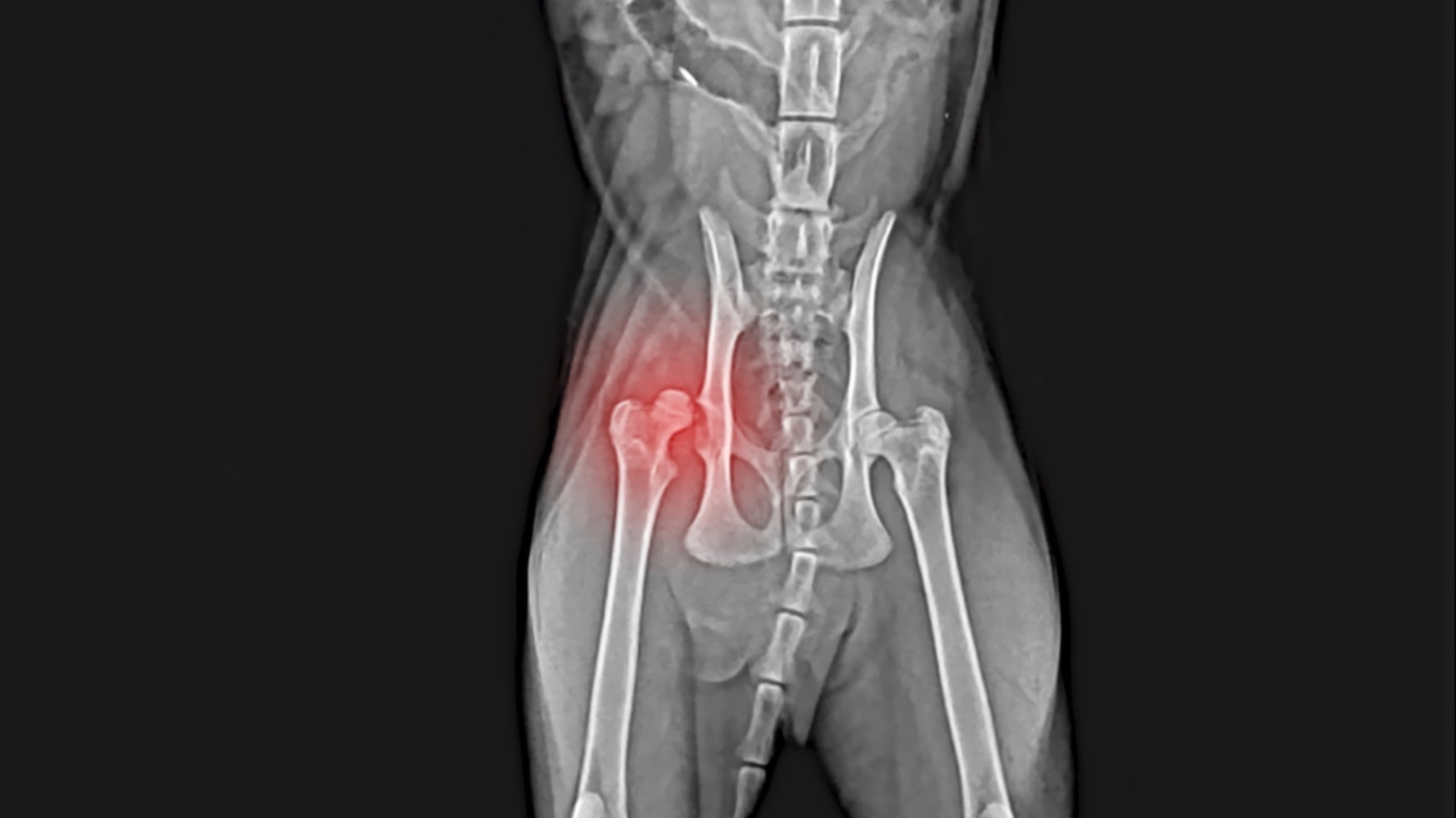 Summer is upon us and what better time to enjoy the great outdoors with your pet.  Unfortunately, what quickly comes to mind to those of us in veterinary medicine?  A greater chance for injuries or even worse hit by car. One injury in particular that I will discuss in this article is hip luxations which account for 90% of all joint luxations in dogs and cats.  Coxofemoral luxations most commonly occur after vehicular trauma. Other causes include luxation due to a dysplastic hip and other forms of trauma. Concurrent injuries are present in 55% of animals and should be addressed prior to pursuing treatment. The hip joint is a diarthrodial articulation composed of the femoral head and the acetabulum. The primary stabilizers of the hip are the ligament of the head of the femur, the joint capsule and the acetabular rim. A luxation occurs when two or more of the primary stabilizers are disrupted.  Craniodorsal luxations occur in 75% of cases.

A ventral hip luxation may reveal lameness, internal rotation along with abduction of the pelvic limb, crepitus through range of motion and lengthening of the affected leg.  Ventrodorsal and lateral radiograph (figure 1) should be obtained to confirm the diagnosis and to evaluate for fractures of the acetabulum, femoral head, femur, capital physis and pelvis.  If the femoral head or acetabulum is fractured, a femoral head and neck ostectomy may be the best option to return function to the limb.  If no fracture is present, the luxated hip should be reduced (closed or open) within 72 hours to preserve cartilage and prevent.

Figure 1. Ventrodorsal and lateral radiograph should be obtained to confirm the diagnosis

Closed reduction can be performed if there are no concurrent injuries in the acetabulum, femoral head and the hip conformation is normal. The patient is placed under general anesthesia; a towel is placed under the affected leg to apply counter traction. For a craniodorsal luxation, the limb is externally rotated to move the femoral head away from the lium. Distocaudal traction is applied to move the femoral head into proximity with the acetabulum. With pressure applied to the greater trochanter and internal rotation of the limb, one attempts to reduce the femoral head.  Once the femoral head is reduced, move the limb through a range of motion to feel for crepitus (undiagnosed fracture) and to unseat soft tissues from the acetabulum. An Ehmer sling should be placed to maintain internal rotation of the femoral head for the next 2 weeks to allow the soft tissues to heal. I would recommend an additional 4 weeks of strict confinement to reduce reluxation. Unfortunately, 50% of patients will reluxate with closed reduction of a craniodorsal coxofemoral luxation.

For a caudoventral luxation, a towel is placed under the affected leg to apply counter traction. Distal traction is applied to the limb to free the femoral head from the obturator foramen. Once the femoral head is free, it is rotated laterally and cranially to seat in the acetabulum.  Once the femoral head is reduced, move the limb through a range of motion to feel for crepitus (undiagnosed fracture) and to unseat soft tissues from the acetabulum.  Hobbles should be placed above the tarsus to prevent abduction of the pelvic limbs. The skin around the hobbles should be evaluated weekly for 6 weeks and changed as needed if they cause skin irritation.

Open reduction can be pursued as primary fixation or after failed closed reduction.  A craniolateral approach is made to the hip joint.  The type of fixation is determined by the amount of injury to the joint capsule and the surgeon’s preference.

A prosthetic capsule can be utilized to provide dorsal stabilization while the soft tissues heal. Screws with washers or bone anchors are placed in the dorsal acetabular rim, and a hole is drilled from cranial to caudal through the proximal femoral neck.  A non-absorbable suture is looped around the screws and passed through the holes in the femoral neck. The sutures are tightened while the limb is maintained in a weight bearing stance.  The prosthetic capsule technique has prevented luxation in 66 to 100% of cases with 65 to 67% having an excellent outcome.

An antirotational suture can be placed. A bone tunnel is drilled from cranial to caudal through the proximal femoral neck. The suture is then passed through a bone tunnel drilled in the ilium at the origin of the rectus femoris. The dorsal joint capsule is reconstructed. The suture provides internal rotation of the hip joint to maintain reduction.

Hip toggle using the tight rope suture.  A guide wire is placed from the third trochanter to the fovea capitis. A cannulated drill bit is placed onto the guidewire, and a 3.5 mm hole is drilled in the femur.  The femur is retracted to expose the acetabulum. The 3.5mm drill bit is used to drill a hole in the acetabulum at the acetabular fossa The tight rope is passed through the femur, the guide needle is removed and the toggle is placed through the hole in the acetabulum. The sutures are distracted to seat the toggle. The femoral head is reduced. Two strands of suture are placed in the tensioning device and tensioned to 5 to 7 lbs. 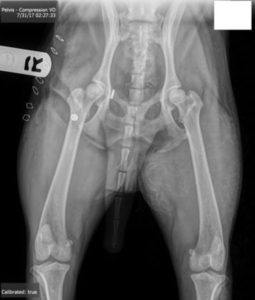 Patients spend 1 to 3 days in hospital postoperatively to manage pain and help them to regain mobility. They are discharged on appropriate pain medications. Confinement with controlled activity/physical therapy for 8 weeks is paramount for recovery.  The postoperative period allows the joint capsule time to heal and regain strength.  Patients will develop some level of degenerative joint disease with subsequent arthritis. This may require intermittent NSAID administration. Most dogs and cats have an active, comfortable life postoperatively.