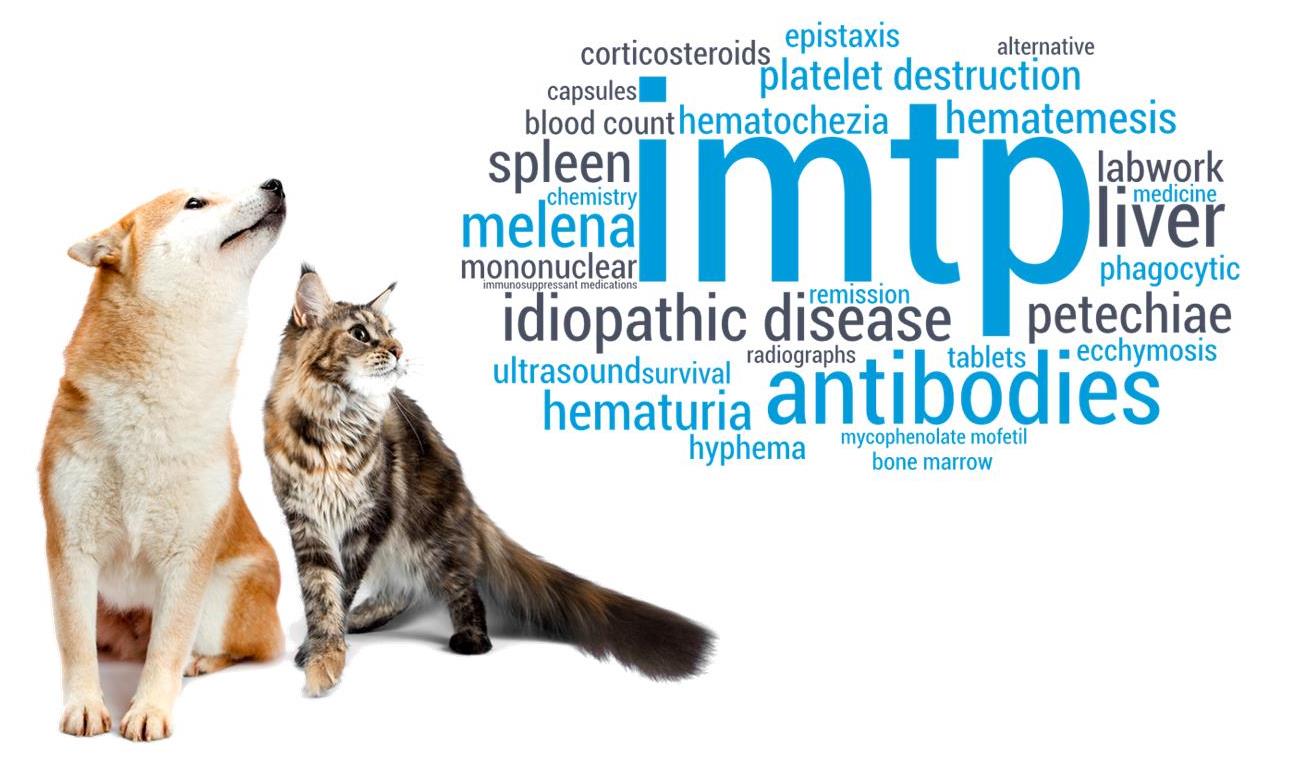 Immune Mediated Thrombocytopenia (IMTP) is the destruction of platelets due to the binding of antibodies, resulting in accelerated clearance from circulation. This occurs mainly in the spleen and liver by the mononuclear phagocytic system. Dogs may be diagnosed asymptomatically by incidental findings on routine lab work or present with signs of hemorrhage such as petechiae, ecchymosis, epistaxis, hyphema, hematuria, or melena. Pending history of the patient, initial diagnostic evaluation should include a complete blood count with a manual platelet estimate, serum chemistry profile, tick titers, and possibly thoracic radiographs and abdominal ultrasound. Bone marrow aspirates are rarely needed but may be considered in refractory cases. Although IMTP is a serious disease, overall survival rate is as high as 84% with relapse rate of 9%. Negative prognostics factors that have been identified included melena and findings of an elevated blood urea nitrogen (BUN) concentration. Primary treatment of IMTP involves administration of corticosteroids, but this may not apply to all cases of canine IMTP. 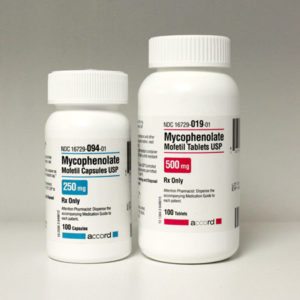 One of the many alternative immunosuppressant medications used to treat canine IMTP is a drug called mycophenolate mofetil. This drug is a reversible inhibitor of inosine monophosphate dehydrogenase (IMPD) and inhibits de novo purine synthesis, lymphocyte proliferation, and antibody production. In dogs, its onset of action is rapid with maximal IMPD inhibition 2-4 hours post pill administration. It has a very similar action to azathioprine and can be used as an alternative, since it seems to be less hepatotoxic and has very little myelosuppression effects comparatively. Common side effects of mycophenolate mofetil include gastrointestinal signs, predominately diarrhea but also vomiting and decrease in appetite. These side effects typically occur at higher doses (10-15mg/kg every 8 hours), and dose reduction and frequency seems to lessen the clinical side effects (10mg/kg every 12 hours). However, as this drug is used more frequently, other side effects may become more apparent.

Mycophenolate mofetil can be used in combination with other immunosuppressant medication except azathioprine or may be used alone in stable IMTP patients. One study found that in 5 hemodynamically stable IMTP dogs, mycophenolate mofetil was used as a single agent and resulted in complete remission. Initial response (platelets >50,000) was seen within 3 days (range 2-6 days). Other diseases in dogs that mycophenolate mofetil has been used in include aplastic anemia, subepidermal blistering autoimmune skin disease, immune mediated hemolytic anemia, myasthenia gravis, glomerulonephritis, and meningoencephalitis of unknown etiology.

Mycophenolate comes as an oral capsule (250mg), tablet (500mg), liquid suspension (200mg/ml), and as an IV formulation. Dosing using the capsules or tablets may be difficult in the smaller canine patients. This medication offers a great alternative to dogs who have been previously on medications that may be contraindicated to start steroids (such as non-steroidal anti-inflammatory drugs) or as an adjunctive immunosuppressant medication to the refractory IMTP patients. Lastly, mycophenolate can also be considered in IMTP dogs with certain concurrent diseases where corticosteroids may need to be tapered more quickly such as hyperadrenocorticism or diabetes mellitus.

In a canine patient that I desire to taper off prednisone quicker such as those that are obese or patients with comorbidities such as hyperadrenocorticism or diabetes mellitus, I consider the addition of mycophenolate when treated IMPT at the start. Lastly, I often add mycophenolate in cases where the patient relapses when trying to taper off steroids.